Some friends of mine bought me this book for Christmas and I thoroughly enjoyed it, so I figured I’d mention it here: 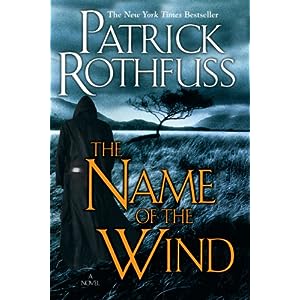 The book is The Name of the Wind by Patrick Rothfuss. it’s the first book in a trilogy, and the other two are being written as we speak.

The book, without spoiling too much, is an account of a fantasy genre hero told in his own words, which sounds simple but is actually a really neat way to tell the story. To be clear, it’s not just that it’s in first person, it’s that the character is narrating the past while at the same time existing in the present. It’s hard to explain, but I liked it.

I have stolen princesses back from sleeping barrow kings. I burned down the town of Trebon. I have spent the night with Felurian and left with both my sanity and my life. I was expelled from the University at a younger age than most people are allowed in. I tread paths by moonlight that others fear to speak of during day. I have talked to Gods, loved women, and written songs that make the minstrels weep.

You may have heard of me.

The main character is very interesting — he’s a mage and a musician, which is a cool combination and not one I’ve seen done a ton (though I have seen it). He also has a very unique, realistic, take on things — he’ll often comment that if he was living in a story things would have turned out differently.

The world itself is pretty neat, and if you’re the kind of fantasy reader who gets really excited by “magic physics” then you’ll also like that aspect of the book.

Rereading this, I’m pretty sure I didn’t make a great case for the book, but I give it all thumbs up. Check out the amazon page and read some of the overwhelmingly positive reviews out there and you’ll see what I’m talking about.