Ratchet and Clank: Into the Nexus

“As likely the last Ratchet and Clank Game on the PS3, the series could hardly ask for a better send-off. – GameTrailers (8.5) 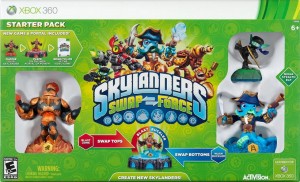 “So much heart and soul is consistently poured into the Skylanders franchise time and time again, and Swap Force is no exception. In fact, it’s the best one yet.
– Destructoid (8.5)

“Sequels don’t get much better than this.
– Nintendo World Report (9.5)

“Depth, breadth, and excellence are the name of the game in this Spyro reboot.
– Nintendo World Report (9.0)

“Owners of some gaming systems have to wait years before they get a true “killer app,” but PlayStation 3 users get theirs on day one.
– IGN (9.1)

“With guns a blazing, Ratchet shoots his way back for another fun outing in space.
– IGN (8.8)

Ratchet and Clank: Up Your Arsenal

“Ratchet & Clank skillfully avoids most of the traps that hold back the majority of modern platform games and presents a fantastic, well-balanced, story-driven adventure.
– Gamespot (9.0)