Well, it KIND of is — but give me a second just to put a word in.

Don’t get me wrong, I loves me some loot. Loot is probably the main driving force for me when playing a lot of games. So I’m not saying that Diablo 3 isn’t about loot.

I’m saying Diablo 3 is not JUST about loot. The mindless clicking IS fun.

In Diablo 3, there are a ton of different enemies. They all have something they do differently, and that makes you react differently. The tree enemies drop those poison pods, the demon enemies throw spells at you, the zombies are really good at standing there and getting hit, and those fat guys expolode into small guys!

But what’s awesome is when the enemies are all mixed together.

It’s one thing to mindlessly spam your attack button while dodging the poison pods, but what happens when those Rhino demons come running the fuck out and hit you unless you dodge through one of the pods?

How many times have I been spamming my attack button on a guy, only to see a nastier guy show up and have to switch targets to fight him instead? Maybe it’s one of the enemies that has projectiles, or one of those fat fuckers, but SOMETHING makes me decide “God damn it, I’m going after THAT guy first.”

And that’s what makes mindless clicking fun for me. Seeing a group of guys and thinking to myself “okay, if I use this ability on those guys first, and then this other ability on those guys, I could clean up” is really awesome, but then I get to immediately try it out, and if it doesn’t work I get to improvise and come up with other solutions. There’s a lot going on there.

Or maybe the clicking isn’t as mindless as it seems. 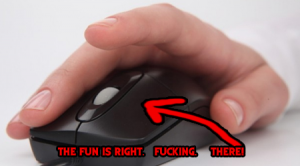 2 thoughts on “Diablo 3 is not just about loot”