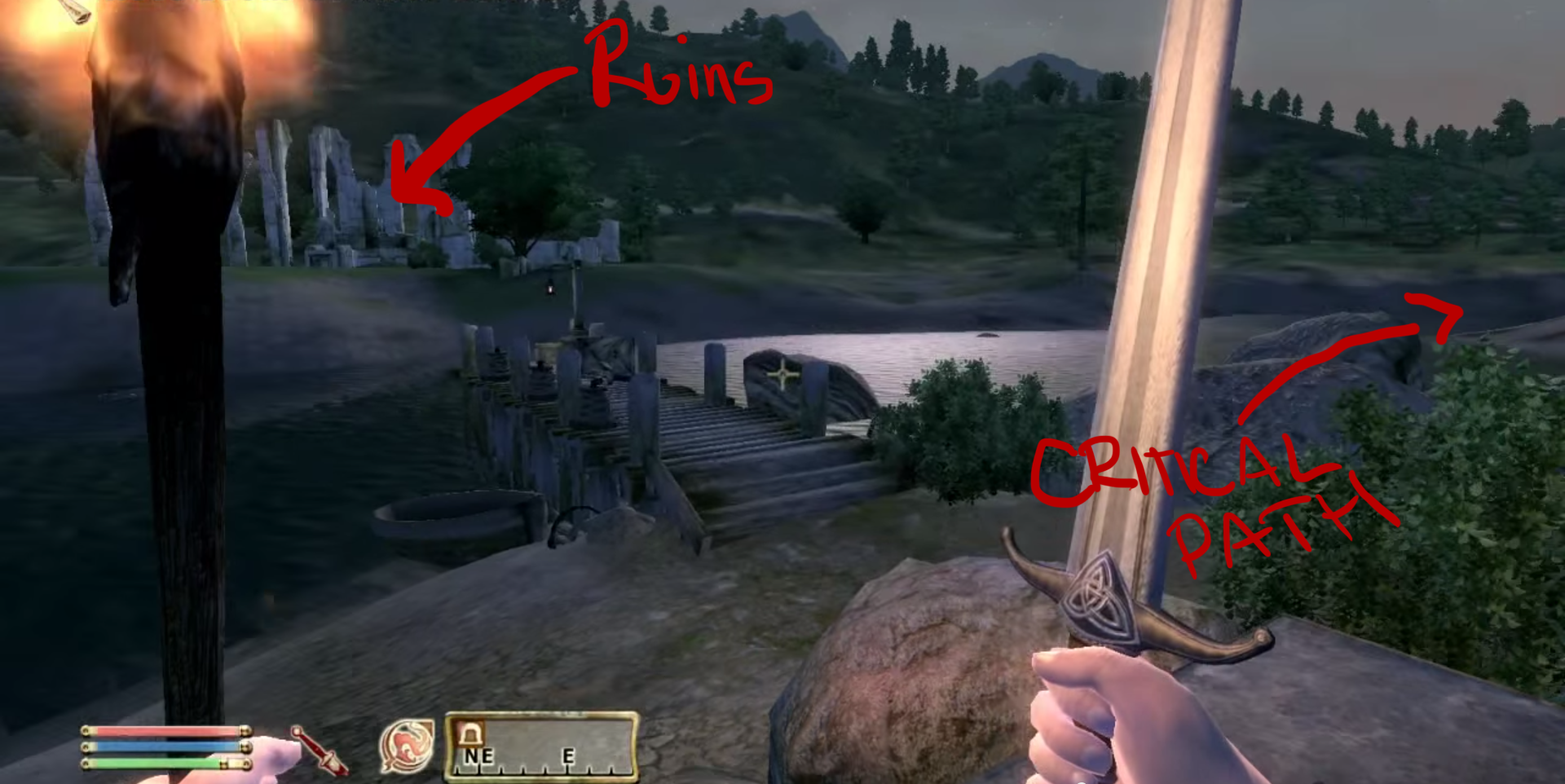 Five years ago I wrote an analysis of the exploration in Bethesda’s The Elder Scrolls: Oblivion. For those of you who haven’t played it, it’s like Elder Scrolls: Skyrim but not as user-friendly. It’s pretty cool, but hard to read the way I originally wrote it. I vaguely recall I was swamped at the time, so I probably cut some corners.

One of the coolest things about Oblivion is how “free form” the game feels. As you wander through the world, attempting to do a quest that you have in your log, you are constantly running across other quests, ancient ruins, castles, cave systems, farms, camps, etc…. All of which are inevitably just slightly off your path, and which show up on your radar when you get close.

In studying how they accomplish this feat, I played through a few steps on the “critical path” quest line, as well as some of other the major quest lines in the game.

Using a method I explain below (supplemented with information from gamefaqs.com) I was able to form a picture of some of the main tools Oblivion uses to encourage and teach their core exploration mechanic.

My methods were as follows:

In all cases I noted the following:

Oblivion does a number of really slick things with the critical path that I didn’t notice the first time I played this game. These techniques really help to foster and train their exploration mechanic in a very subtle way.

The first two quests on the critical path (“Tutorial” and “Deliver the Amulet”) essentially boil down to the following steps:

It’s clear from this that the designers are leveraging their critical story quest line to essentially train the player on the exploration mechanic, and they do it without saying anything. They just dangle carrot after carrot in front of you

The way they dangle two dungeons in front of you before they make you walk right up to one is a really great concept. They give you two chances to go off and explore on your own (which I did the first time) before they beat you over the head with a dungeon. It’s pretty clever, if you ask me.

The next quest in the critical Path Line, “Find the Heir,” allows you two different ways to approach it. You can either walk straight there from the location you get the quest (which involves going off-road through a forest and over complex terrain) or you cal walk there along the roads.

I did both and came up with the following results:

Both (after they join up)

They were able to leverage this step of the quest to give you a staggering number of exploration chances, and that’s independent of the direction you chose to go.

Cities are full of NPCs, shops, quest locations, quest givers, and all kinds of fun stuff. Oblivion makes good use of its quests to get the player to spend time in these cities. Further, the loot system encourages players to spend a lot of time in cities selling the loot they’ve gotten from adventuring.

Basically, think of the Cities as quest hubs — lots of quests start in them and lots will take you through them.

We’ve seen how the designers leveraged the critical path to promote exploration. For the next part of my study, I checked out some of the largest quest lines in the game and examined how they encouraged exploration.

It seems like the main purpose of the major quests is to expose you to the cities, which is an awesome idea. Also, while trekking to and from the quests associated with these guilds, you will run across a ton of dungeons, enemies, and other quests.

Most of the quests in Oblivion are “stubs.” These are one-quest lines that don’t lead to anything else. They also frequently involve travel, asset re-use, and text (rather than VO) to explain the mission.

Examples are any quest where you find a book or a note, or just interact with something or walk into an area. Quests usually involve elements like corpses, books, notes, dungeons (sometimes dungeon retraversals), peoples’ houses, or different uses of existing emergent mechanics (like dodging guards). These quests sometimes tell a story (and have updates to them) and sometimes they don’t.

The really clever thing about stubs is that they make the world seem much more alive, full, and vibrant. They also add extra hours of optional gameplay for a minimal cost, which is always nice.

Walking along roads you’ll see things in the distance (even without the compass, which is a real help). Since they picked Ruins and Castles as two of their three dungeon types, these serve as GREAT landmarks (especially the ruins, since they stand out of the natural environment very well).

One thing I really noticed in Oblivion was that they didn’t always take much advantage of the terrain when placing their landmarks. There were a number of gorgeous valleys and hilltops that would have been perfect for a castle or ruin. The roads would take turns that forced me to look at these empty valleys, and I always thought “man, I wish there were something down there).

2015 Note: They did a lot better with this in The Elder Scrolls: Skyrim, so they must’ve learned their lesson.