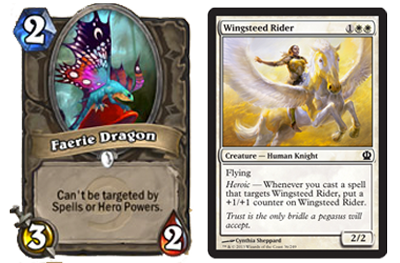 I’ve been playing a lot of Blizzard’s new digital-only collectible card game Hearthstone, and I really like a lot of the decisions they made. There are a few things I really miss from
playing Magic: The Gathering, though — and I’d love to give the following “merger” of the two a try some time:

Rules:As Magic: The Gathering, except:

I haven’t tested this — I just rattled it off the top of my head. But if anyone plays it, let me know how it goes.