Note from Mike in 2012:
I wrote this article and its companion more than 4 years ago. In that time, my game design philosophy has evolved and changed quite a bit. While I think there are still good nuggets to pull out of these articles, I just want to say that they’re no longer as current (in terms of my thinking). That disclaimer done, check it out!

I’ve been struggling for a while getting started on part two of my “Stealing Game Design… Properly” article. I think the reason for it was mainly that I’d picked such a LARGE topic for part two.

At the end of part 1, I promised that we would dissect several games. At the end, we would extract a core mechanic from one game and build up an original design for a new game around that.

As soon as I sat down to do it, I discovered that was a fairly massive undertaking. And since I’m a lazy slothful wretch of a human being, it kept me from even starting. Fortunately, I now have a way around this.

I’m going to divide up part 2 of the article into many sections. We’ll do one dissection at a time over several articles and then finish up with an article building a new game as described above.

For this week’s dissection, we’ll cover a classic game. These tend to be less complex than modern games, and it will serve as a good clean example for our first time.

So with that, our first dissected game is going to be Taito’s classic Space Invaders.

Note: If you haven’t already read the first article in this series, you should read that first. It’ll make what comes after this much more understandable. 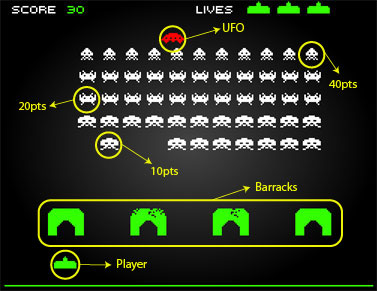 The player controls a small ship at the bottom of the screen. The ship can move left, move right, and shoot a bullet that moves slowly straight up the screen. Only one such bullet can be on-screen at a time.

The antagonists are the “Space Invaders” — the block of aliens at the top of the screen. These aliens move slowly left and right on the screen in discreet increments. When the block of aliens reaches either side of the screen, the whole block moves downward one increment. If the player hits an alien with a bullet, the alien is destroyed and the player gets a number of points based on the type of alien he destroyed. The aliens begin moving very slow, but speed up over the course of the stage.

The UFO will randomly spawn at the top of the screen and travel horizontally across the screen. Hitting the UFO with a bullet will destroy it and award the player a “mystery” number of points.

The aliens and the UFO both fire bullets down at the player. If an enemy bullet hits the player’s ship, it is destroyed and the player loses a life.

The player can use the barracks as cover, but they do not regenerate at the end of each stage so eventually they disintegrate into nothingness.

If the player destroys all the aliens on the screen, he progresses to the next stage. All the stages are essentially identical, with small variances in alien speed and attack frequency to make it harder (depending on the version of the game you play).

The game ends when the player loses all his lives (he starts with three) or if the block of aliens gets far enough down the screen to touch the barracks area.

The goal of the game is to earn as many points as possible before the game ends.

The core mechanic of Space Invaders is to move your ship and shoot at moving targets. Those targets sometimes fire back.

“Meta-Games”
If you look at the four meta-games I mentioned in the last article (Growth, Collection, Accumulation, and Progression) you can begin to sort out the other mechanics into these categories.

Growth:
This is the only meta-game that isn’t used at all in Space Invaders. The player and his character do not grow or increase in capabilities over the course of the game. In fact, the player decreases in capabilities as he loses lives and as his barracks are destroyed. So we can write this one out.

Collection:
At first glance, it may seem as if there isn’t a collection component to Space Invaders — and anyone who would think so wouldn’t necessarily be wrong. Personally, though, I would put all the UFO gameplay under the header of “Collection.” Every so often the UFO will come out and the player is encouraged to go out of his way (and put himself in danger) to destroy it for extra points. Since this element, to me, stands out so sharply from the rest of the core gameplay, I would place it in its own category.

Accumulation:
This one is simple: points. The player accumulates points and, if she does particularly well, gets a high score to which she can attach her initials.

It’s as simple and clear an example of the Accumulation meta-game as you can get.

Progression:
While the progression from one stage to another is not a MAJOR goal of Space Invaders, it is a goal nonetheless. Destroying all the aliens to move to the next stage is a fairly textbook example of the Progression meta-game.

Rewards:
Rewards in Space Invaders are pretty simple. When you kill an enemy you get two things:

As a note: the points rewards scale up based on difficulty and risk (the further up an alien is, the harder it is to hit and the more points it awards you), which is always a good technique to reward risky play.

Minigames
Space Invaders does not have any major non-core mechanics that would classify as minigames in my book. The only gray area could be the UFO gameplay, which I’ve categorized as a meta-game. Really, it could go either way, depending on whether you see it as a major part of the gameplay or as a one-off mechanic whose purpose is to provide a break from the core mechanic.

Wrap-up
So what is this all good for? Well lets say I was intending to develop a classic-style arcade game, maybe as a flash application for a casual games site. I could use this breakdown to steal bits and pieces from Space Invaders without bringing along any extra fluff.

For example, if I wanted to excise the core mechanic (“move your ship and shoot at moving targets which sometimes shoot back”) I could now do so without taking other garbage with me. The core mechanic says nothing about the game’s particular verbs — for example, it doesn’t specify that I can only move my ship left and right. It also doesn’t specify anything about the enemies, their behavior, or any of the meta-games that I can attach to it to make it special. For example, my game doesn’t have to be about “points” just because Space Invaders was.

Now, when I begin the mental exercise of designing this hypothetical game, I have a starting point and can begin thinking of (or stealing, for that matter) extras to pile on top of it and make it my own.

It should also be noted that we could use what we’ve learned here on a much more complex game — not just a simple arcade game. At D.I.C.E. one year, one of the developers of GTA3 pointed out that the core mechanic of GTA was based heavily on the core mechanic of Pac-Man — and if you think about it in terms of breakdowns like this that makes a whole lot of sense.

Again, what I’m describing here is a mental technique that I use when creating new gameplay for my own games using building blocks “stolen” from other games. The intention is to give you a toolbox for doing the same thing for your own games. You may use the same tools and arrive at a different breakdown from me, and that’s okay. The results of this are supposed to be highly individual.

The only important thing is that you think critically, you Master Thief, you.

This was all pretty simple and self-explanatory, but that’s why it’s the first example. Stay tuned for my next example where we’ll apply the same techniques to a more complicated game starring a red plumber and his green bro.